The Magnuson Park Wetlands were created as part of a larger effort to improve habitat and water quality across Washington. Many of the channels and waterways were created to manage the wetlands. This bridge runs over the only natural outlet to Lake Washington, and is a good place to point out a few invasive plant species. Invasive plants, such as those described below, threaten our local ecosystems and fish and wildlife habitats by outcompeting native plants and degrading water quality.

At this second outlook overlooking the pond, you may notice heart-shaped lily pads decorating the water with splashes of yellow, cup-shaped flowers. These are native Yellow Pond Lilies, also known as Cow Lilies or Spatterdock. Their flowers attract pollinating insects while their leaves provide shade for tiny invertebrates and cover from predators. Ducks, birds, and muskrats can be found in their midst feeding on their seeds and roots.

Magnuson Park offers a variety of walking trails to explore the park and its wetland areas. This nature walk guide will highlight the wetlands and their inhabitants, with a particular focus on beavers and the work they do on the shared urban landscape.

To see beavers—who are mostly nocturnal—the walk should be done at either dawn or dusk. Even if you don't see beavers themselves, you will see signs of beavers and their impact on the wetlands everywhere! This walk may also be taken at any time of the day to experience other forms of wildlife.

Parking can be found at lots E1 and E2 near the Magnuson Park Boat Launch. Be sure to bring some water to stay hydrated, as well as binoculars to observe critters! 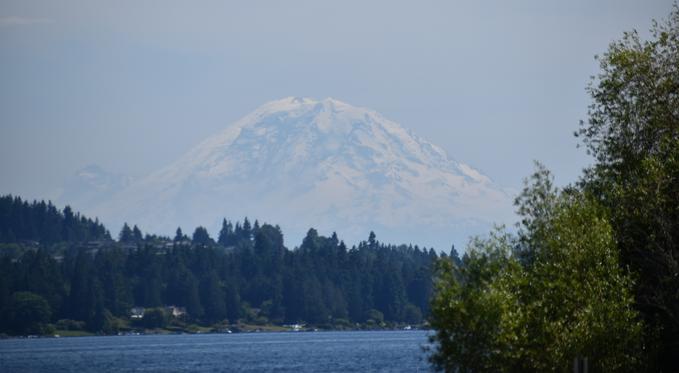 When looking for beavers, scan from left to right, slowly, and back again. Look for ripples in the water that indicate movement. Drifting logs are usually mistaken as beavers, so look for quick movement across the water. If you’re lucky, you may catch a beaver dragging sticks behind them as they move through the water, or you may see more than one beaver! Binoculars are useful to get a close-up look of these critters.

This nature guide was developed by Mary Heather Jingco, a 2020 scholar from the University of Washington’s Doris Duke Conservation Scholars Program and a 2021 intern at Beavers Northwest. She hopes that this nature guide will foster an interest for wildlife and beavers, as well as encourage people to explore the outdoors!

The Magnuson Park Wetlands were designed in a way to help people feel like they were in the wetlands, with all trails ADA accessible and critter accessible. However, as the trails are so flat and near the water, beavers initially caused flooding issues when they first moved in. As you peer into the grass, listen to the chirping of the katydids as well as the occasional quack or squawk. Note the pathways beavers and other wildlife have made crossing from one pond to the other, and pathways leading up to vegetation where beavers get food.

Towards your left you may notice a buildup of mud and a large pile of sticks on the embankment. These are remnants of an old dam, which beavers used previously to raise the water level. Interestingly enough, beavers do not typically reuse the same sticks and material that has been removed from a dam. Parks staff would remove the dam daily to prevent trails from flooding, the beavers would rebuild, and the cycle repeated over and over resulting in the large pile of sticks found on the bank. Beavers Northwest has worked collaboratively with Seattle Parks and Recreation to resolve the issue by installing pond levelers to help control water level and mitigate flooding issues, while allowing the beavers to stay! 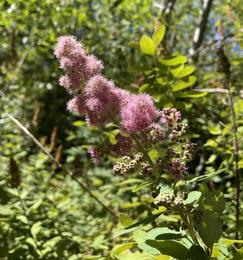 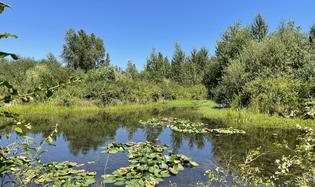 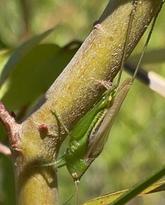 Keep an eye out for Beaver Chew! 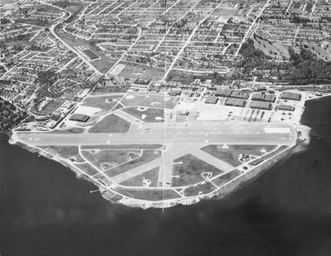 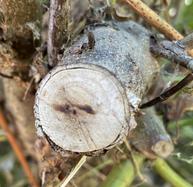 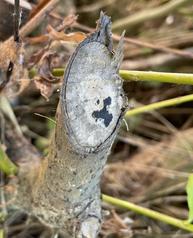 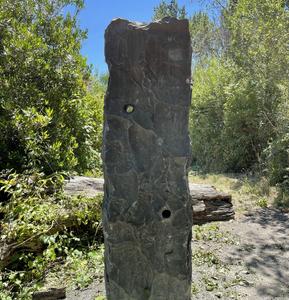 Cast your gaze upon the first pond you have encountered on this walk. On a warm, sunny day, you may see wood ducks and ducklings swimming across the pond as well as butterflies fluttering about. Note the willows around you growing as shrubs rather than trees. As a beaver-resistant plant, established willows are able to resprout even when chewed down to a stump.

Beavers use trees not only for building material, but for food as well, chewing branches down for the layer behind the bark—tasty cambium. Take the time to observe the work of our tree-designer beavers: the thicker main trunk, the thinner branches of new growth, and in between the branches, beaver chew!

Another native plant species to keep an eye out for is Thimbleberry. With soft, palmate leaves and thimble-like red berries, the plant is an attractant for butterflies, squirrels, and birds. Feel free to run your fingers against the fuzzy leaves or grab a bite of the seedy berries. Native species like these are great as they are adapted to our climate, support the numerous wildlife in our area, as well as promote biodiversity! As the foundation for healthy ecosystems, work is being done to remove invasives and restore their native numbers in the wild. 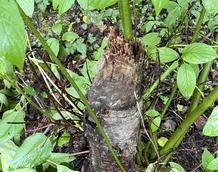 You can learn to distinguish between beaver chew and human cuttings after a few observational practices. As you walk around the park, keep an eye out low to the ground and near the water for chewed stumps and trees.

Beaver chewed sticks have distinct grooves from their teeth and come out to a sharp point. In comparison, branches that have been cut by humans are usually flat and non-serrated. The best way to tell is to run your fingers against the cuts and to look for teeth marks!

Magnuson Park was formerly a Naval Air Base station up until the 1970s, when the land was given to the City of Seattle and developed into a park. Installations can be found throughout the park that honors this history, such as the steps up the hill that indicate where one of the runways used to be. 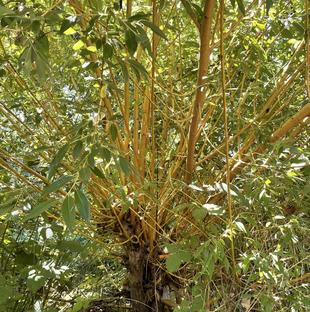 On the right side of the bridge you will find Yellow Flag Iris and English Ivy. Yellow Flag Iris are commonly found in very shallow water or mud. They have broad, flat, and sword-shaped leaves as well as three-petaled yellow flowers. On the other hand, English Ivy are evergreen, perennial vines that have the ability to spread aggressively as they are well adapted to the Pacific Northwest environment. Their roots allow them to anchor and climb vertically, outcompeting native plants as well as killing trees. 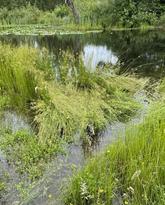 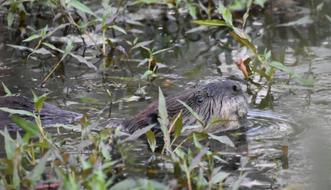 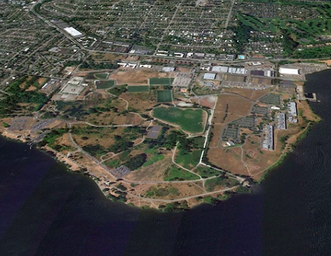 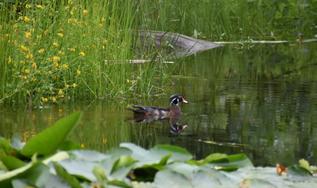 Restoration work in progress, with beavers newly moved into the star-shaped pond.

A series of sculptures named the Straight Shot can be found lined up across Magnuson Park. Created by Perri Lynch, this art installation comprises twelve stones aligned in orderly progression from north to south, marking the Sandpoint Calibration Baseline. The distance between each pair of stones doubles over the course of a measured kilometer, and the baseline may be used for land surveying. One of the stones is found within the park wetlands. As you peer through the stone, take up the stance of a surveyor and make a theoretical straight shot to the next pair of stones.

Magnuson Park offers many more trails and walkways around their wetlands and through the park. We hope this introductory guide opens your eyes to the plants and wildlife found around the park. Be sure to leave no trace while out on these walks. As a federally protected wetland, dogs must be kept on a leash, wildlife must not be fed, and one must stay on the gravel trails. Be sure to dispose of your waste properly, leave what you find, respect wildlife, and be considerate of other visitors! Thanks for exploring with us!

Approach the lookout quietly as beavers are sensitive to noise and scare easily. Be wary about going past the pond vegetation. As you look out at the center of the pond, the little island covered by trees is the beaver lodge! Beavers have continuously occupied this site since 2013 and so they likely have a family consisting of the adult parents, the new kits, and the yearlings. Beavers stay with their family unit until they are about two years old, when they then go off on their own. Towards your right obscured by all the vegetation is the beaver dam. Built many years ago by the first colonizing beavers and maintained by the resulting family, the dam began growing trees from all of the cuttings of beaver-resistant trees used to build the dam.

The large restoration project to create wetlands and improve water quality in the park area was completed in 2013. These treatment wetlands act as a filter, slowing down water from uphill housing areas and removing pollutants before the water flows out into Lake Washington. Beavers moving in and renovating the area have only made the wetlands bigger and better, emphasizing the important role they play in creating habitat and maintaining water quality!

Beavers create a vast array of ecological benefits by creating and maintaining wetland habitat, which other animals (such as Salmon, Blue Herons, and Bald Eagles) have come to depend on! As a community, we can come together to better understand where these animals are, how they live with us, and what benefits they bring to our communities. Help us by setting up an iNaturalist account and log your beaver sightings to our project.

Interested in going on a nature walk but don't know where to start?

This is the guide for you!

Download and try out the iNaturalist app at your next nature walk! This app not only connects you to nature by identifying the plants and animals around you, but inputting your observations allows you to participate in community science mapping as well.

On the left side of the bridge you will find the Himalayan Blackberry as well as Reed Canary Grass. You may be more familiar with the highly invasive Himalayan Blackberry, which produces edible fruit and forms thorny thickets. They are abundant across wetland edges and rivers, often blocking wildlife and human access to these areas. Reed Canary Grass are also found along wetlands, moist fields, and ditch banks. They present a major challenge for wetland restoration efforts due to their ability to suppress native species, choking wetlands and turning them into grasslands. 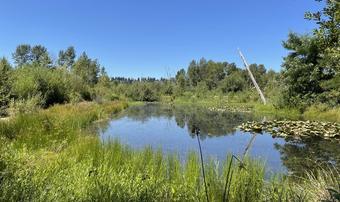 A Self Guided Walk in Nature