​As the climate changes, many ecological processes will be altered. As average temperatures increase here in the Pacific Northwest, winter precipitation will fall more frequently as rain rather than snow. Our snowpack will decrease and stream flow timing will shift. Extreme flooding and drought will become more likely.

Beavers can have a dramatic influence on the landscape. By building dams, they increase the resiliency of a watershed.  Their dams create wetlands which store water, slow fast-moving waterways, mitigate flooding during high flow conditions and release water during low-flow conditions. Beavers can be utilized as a restoration tool in highly degraded water systems to improve habitat and add complexity to waterways. 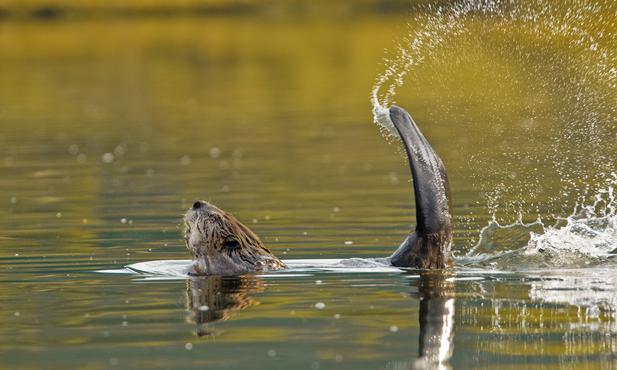 ​​The American Beaver, Castor canadensis, is found throughout North America. They are considered ecosystem engineers because of their ability to drastically alter ecosystems. The largest rodents in North America, beavers are herbivores feasting on herbaceous plants and the bark of woody plants. Their eating habits indicate that they have preferences for certain species including vine maple, willow and alder in the Pacific Northwest.

Beavers build dams using a variety of materials from small trees and branches to grass and mud to rocks and litter. They are crepuscular (active at twilight) and nocturnal, often returning to a site to maintain or rebuild a dam overnight. The sound of running water is the primary cue for beavers to maintain dams. They build these dams to improve their habitat by raising water levels. The ponds they create allow them to swim throughout the area to find food and avoid predators.

Beavers live in family groups consisting of a monogamous breeding pair, yearlings and young of the year. They typically have 2-5 kits per year and have a life expectancy of 10-15 years. These family groups live in lodges or bank dens. 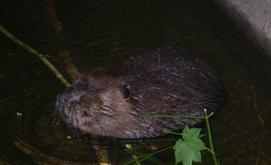 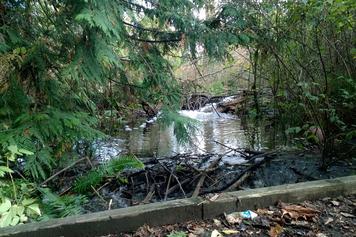 With both human and beaver development so intricately tied to waterways, conflicts often arise. These conflicts are common in urban and rural areas where homes, business and roads inhabit the stream and riparian corridors that are so appealing to these ecosystem engineers. Flooding of human infrastructure can be a costly and stressful result of beaver activity. However, there are non-lethal solutions to retain the benefits of beavers and mitigate human impact! Visit our Conflict Resolution page for more information. 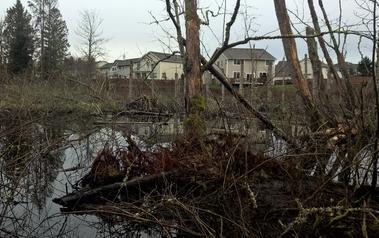 Climate Change — The state of the science from WelcomeAnthropocene on Vimeo.

Beaver management is a complex and ever-changing field. Beaver are wild animals that have an innate ability to alter landscapes. When that ability comes into conflict with our human land use, a variety of strategies come to light. Balancing the human land use and beaver ecosystem engineering is advantageous for all involved. 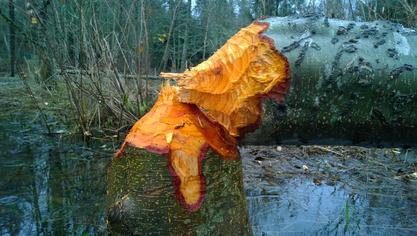 Beavers are ecosystem engineers. They drastically alter ecosystems in a variety of ways. The dams that they build add complexity to streams and rivers while slowing water velocity. The ponds behind these dams store water which is slowly released during low flow conditions. They also increase groundwater recharge and retention, store sediment and increase riparian habitat.

These changes shift plant and invertebrate communities and increase habitat for waterfowl, amphibians and mammals. The slow-moving water also provides refuge for fish including juvenile Coho. The slow water, abundance of invertebrates, and increased aquatic vegetation provides opportunities for young fish to forage while requiring less energy. While these effects may vary depending on the size and location of a dam, the benefits are manifold.

​Before European settlement of North America, beaver populations have been estimated at 60-400 million. The population was decimated by trappers throughout the 1700s and 1800s. Beaver fur was used to make felt hats and their castoreum was used in perfumes. By the early 1900s, beavers had been extirpated from many areas and their numbers were dwindling.

Since the fervor for felt hats and trapping beavers has died down, the population has slowly rebounded. More recent estimates put the total beaver population at 6-12 million.

​As discussed in the above sections, beavers have an amazing ability to alter ecosystems. The benefits that they provide to waterways are manifold. They provide countless ecosystem services: creating habitat for fish and other animals, adding complexity to streams, and recharging groundwater.

If beavers have moved into your neighborhood, consider the benefits that they provide. Visit our Conflict Resolution page for more information about living with beavers as your neighbor.